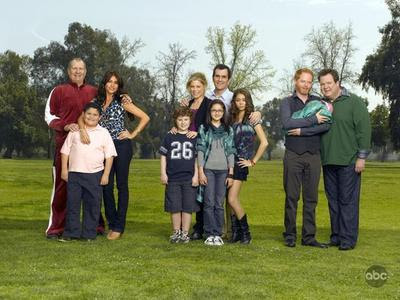 Yes, I’m blogging about TV again.  You’d think that’s all I do.  ahem.

Mom and Dad have a few shows they watch including a few that I don’t but it is a RARITY that Mom insists I watch something (probably because I’m already watching it).  I was shocked SHOCKED when she said I should catch Modern Family.  It stars the dad from Married with Children and boy howdy was that on the “bad list” when I was a kid.  And I whispered in a restaurant, “Doesn’t that have a gay couple in it?”  We’re NOT homophobic but Mom has always been ultra-conservative in her TV viewing (I was never allowed to watch The Smurfs, people) and I was just SHOCKED she would still be recommending the show.  “But it’s REALLY funny,” she insisted almost laughing at something she must have remembered.

I looked it up online this weekend and it’s only a 22 minute show without commercials and they’re only 7 episodes in.  It was easy to get caught up this weekend.  Y’all.  That show is HILARIOUS.  FUNNY.  SMART.  REAL.  SARCASTIC.  FUNNY.  HILARIOUS.  Honestly, I would put the funny factor of their “Coal Digger” episode up against most episodes of The Office.  This show instead of being based in the office is based in 3 diverse homes that really ARE dealing with modern issues and then some very age-old relational issues.

Sometimes the dad reminds me of my dad.  Sometimes the kids remind me of my kids.  Sometimes I connect with the mom, sometimes with the new parents.  Sometimes I remember acting like the teenage girl.  It’s really great to be able to identify with so many characters.  Or at least recognize them from someone else in your life.

Phil: Claire likes to say "You can be part of the problem, or part of the solution." But I happen to believe you can be both

Mitchell: Just the emerald city at the end of my yellow brick road
Cameron: Wow you did it
Mitchell: What?
Cameron: You made figure skating sound even gayer.

Gloria: Who’s side are you on?
Jay: She’s my daughter, you’re my wife. Let’s remember what’s important, there’s a football game on today

Jay: No, see this is exactly why we sweep things under the rug. So, people don’t get hurt.
Phil: Well, yeah, until you sweep too much under the rug. Then you have a lumpy rug… creates a tripping hazard…and open yourself up to lawsuits. Boy, you can go a really long time without blinking

Claire [on her mother]: You know how growing up we all have that voice inside our head that tells us we’re not good enough? Well, mine was outside my head driving me to school

Jay: 90 percent of being a dad is just showing up

Phil [about Desiree]: Am I attracted to her? Yes. Would I ever act on it? No, no way. Not while my wife is still alive

Here are a few great clips:

Now go get caught up and set your DVRs!!!  And I promise not to go create a fan site!!

Another IKEA trip means a few pictures are in order.

We bought some of these wire rack thingies and thought the playroom was a great place to display the kids’ art.

I love the face on that guy on the bottom left.  The second row, second picture looks like a butterfly to me but it’s just random painting by Lexi.  Top row, far right is one of my favorite family pictures Emma did to date.  She has us all labeled, even our dog.

Close-up of the wire.  Please ignore the crayon on the wall.  I like to think the creativity is just spilling over right onto the room.  Yes, Mom, I”ll get a Magic Eraser right on that.

Finally got a frame for their picture.

This is not actually from IKEA but Southern Living. I took all of our pictures where we were eating/out to eat and put them on the pantry door.  The funny thing is I showed Scott, not letting him in on that fact and he says, “Wow, they sure do like to eat.”

The only change in our bedroom are the picture accent lights.  I turned these on last night right after dark and loved walking by and seeing it!  It was so inviting!

We have some more shelves we bought for our bathroom but they haven’t gone up yet.  Always something to do!

On another note, we went to the lighting store to finally get pendant lights for the kitchen, sconces for the living room and a light for my office and the lady was absolutely no help.  And in fact, almost rude. So still no movement there.

Oh and one more note, Sally who started this whole renovation thing is back at my Mom’s shop for a class tomorrow night!  I would love to show her all the stuff we’ve done.  And if you’re in the area, come check it out.  It’s $20 and all proceeds go to charity.

I won’t do a long post on the (family) party except to say it was completely last-minute (just because I’m a procrastinator) and absolutely nothing matched but it all turned out really well.  And really, when you get to watch someone be this excited about hangers and OxiClean, the plates don’t seem to matter.

And this, well, you must know how I feel about that…

A new baby.  A clean slate.  No inkling of what this little bundle of joy would bring.

No, we didn’t know that you would be sweet

All at the same time

We didn’t know that you would love chicken

Or grilled cheese and tomato soup (just to dip it in)

We didn’t know that you would love all that glitters

How were we to know that you would love Hannah Montana

Or Marley and Me

We certainly didn’t know you would like closed doors

We didn’t know that you would love tights

I guess we just weren’t prepared for Lexi.

OK, I can’t help.  I saw myself on TV tonight for all of .001 seconds and I’m a wee bit excited.  Next week is the premiere of One Tree Hill’s episode 9 where I extraed for two days.  First today, a still came out that I made it in.  It’s only the back of my head but I’m there! And then tonight for the promo, you could see me!  It was only the side of me, but I was there!  First, here’s the promo.

And you say, wait, what?  I didn’t see Amy in there.  But wait, (Heather and) I actually recorded a video of the play-by-play.

Go back and check :15-:16 in the promo. So yeah, I’m hoping next week goes a leetle better but omg, I’m in an episode of One Tree Hill!